Whilst the history of Alderley Edge Golf Club goes back to 1907, golf was played on the site of our course for some time before this. In 1889 the Wilmslow Golf Club was formed and established its course around an area known as 'Butterfly Bank'. The early days of golf on this land were somewhat different from those of today, indeed golf was only played in the winter months as the grass was too long in the summer ! In 1903, a large core of the Wilmslow membership agreed to acquire land at nearby Great Warford, and the course at Butterfly Bank was abandoned. Several years later in 1907, a group of novice golfers led by Frank Dewse, agreed to establish the Fulshaw Golf Club on the site of the old Wilmslow course. The Fulshaw name came from the area of Wilmslow in which part of the course was situated, and land was leased from local tenant farmers. Members and a small greenkeeping staff with very basic equipment then began the major task of restoring the land for golf.

Play began in late 1907, and membership steadily grew as the popularity of the game spread. After several changes to the course, the professional at Manchester Golf Club, T.G. "Tommy" Renouf', rapidly establishing himself as a top professional in the north, and a current England international, was appointed to make design changes when additional land was leased in 1912.

The first "clubhouse" was the Brookfield Hotel (now The Oakwood restaurant) on Brook Lane. 1909 saw the construction of the club's own clubhouse, a pavilion acquired from the Stockport Golf Club at a cost of £60. There were various extensions added over the years but this wooden building remained as the core of the clubhouse until 1977 ! In 1923 the club's name was changed to Alderley Edge, although it is not clear why the Fulshaw name was dropped. The change in name coincided with the arrival of a new professional,Tom Barber, who soon became one of the top tournament players of his era, winning various events and contesting several classic matches.

One of Alderley's best players was Harold C.Humphreys, who is perhaps best known for founding the Umbro company in Wilmslow in 1924. Harold was a fine player who held a sratch handicap for over 20 years and won the county championship in consecutive years (1950-51), won the county foursomes three times and also captained Cheshire for a number of years.

A regular visitor during the early 1950s was Alex Hay, the former BBC commentator, who was stationed locally 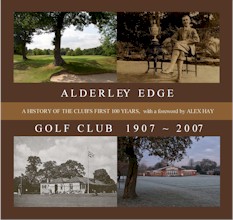 and later became pro at Dunham Forest. He refers to the friendly welcome he received at Alderley in his autobiography.

Alderley has always been a 9 hole course, however in 1928 serious consideration was given to extending the course to 18 holes.

The clubhouse was rebuilt in 1977, giving members and visitors more spacious and comfortable surroundings. A further major refurbishment and extension took place in the year 2000. Alderley today remains a private members club, with excellent facilities for members and visitors to enjoy.

To mark the club's Centenary in 2007, club member Jeremy Dixon wrote a 72 page book, with a foreword by Alex Hay, to document the full history of the club.